Back
FKAB Marine Design have received an Approval in Principal by RINA for the MR tanker design using LNG with steam to produce Hydrogen, for propulsion, and CO2.

Hydrogen is produced in a gas reformer from Helbio which supplies both the main engine as well as the fuel cells in the power system from ABB. The CO2 is captured directly at the reformation, instead from the exhaust gas, and stored onboard.
By using this currently viable technology and fuels, the IMO 2050 targets can be achieved already today.
Read the complete press release below.

Piraeus, 17 February 2022 – RINA has announced the Approval in Principle (AiP) of Swedish designer FKAB Marine Design’s hydrogen powered MR Tanker, the first AiP of a design using currently viable technology and fuels that achieves IMO 2050 targets. Conceived by the class society and designed by FKAB, the propulsion is based on combining the ship’s fuel (LNG) with steam to produce hydrogen and CO2. The MR LNG/hydrogen-fuelled vessel is the result of a joint project with ABB and Helbio (a subsidiary of Metacon AB).

Antonios Trakakis, Greece Marine Technical Director at RINA, said, “To meet CO2 reduction targets, shipping is faced with the challenge of having solutions which either rely on fossil fuels, but which still require technology to mature, or on new, zero carbon fuels, the availability of which is still far from being guaranteed. This new design enables the use of hydrogen as a fuel today without the need for bunkering and storage on board and exceeds IMO 2050 targets for 70% reduction of carbon intensity.”

The MR tanker design is based on combining LNG with steam in a Helbio gas reformer to split LNG molecules into hydrogen and CO2. Hydrogen is then directly used to fuel the internal combustion engines and fuel cells in a hybrid marine power system by ABB. The CO2 is captured by splitting the LNG molecules, rather than from exhaust gas.

Any solution that aims to reduce a ships’ CO2 emissions today should ensure a competitive Carbon Intensity Index (CII) rating, which has increasingly stringent rating thresholds towards 2030, throughout the whole service life of the vessel, not only when getting closer to 2050. This may prove to be a substantial limitation for conventional ships built with the intention of being retrofitted after 10-15 years from delivery.

Using this design, hydrogen usage can be progressively increased to maintain a top CII rating throughout the life of the ship, reducing CO2 emissions in a parallel slope with the applicable regulations. The ship can meet full decarbonisation targets by either running the engine on 100% hydrogen, or by producing all the power needed by fuel cells. In this way, the owner can decide the rate of CO2 reduction.

Andreas Hagberg, Head of Sales & Marketing Department at FKAB, commented, “The concept is revolutionary because it does not require any portside hydrogen infrastructure. The hydrogen is created onboard the vessel and all necessary equipment can be easily fitted on deck, so ship owners can convert existing vessels. The fuel cells have been specifically developed to produce more power and fewer emissions.”

CO2 is liquefied by the cryogenic steam from the LNG and can be used as the inert gas for the tanker. No additional bunkering, aside from normal LNG, is required. The hydrogen produced can be used to power the main engine, or fuel cells, or a hybrid of the two. The AiP covers the hybrid option.

Trakakis concluded, “Now that the concept has been brought to the real world through an immediately applicable CII A rated design, this opens the door to reduce emissions in a much shorter timeframe. The AiP is for an MR tanker, but the technology can be applied to a wide range of vessel types and sizes.” 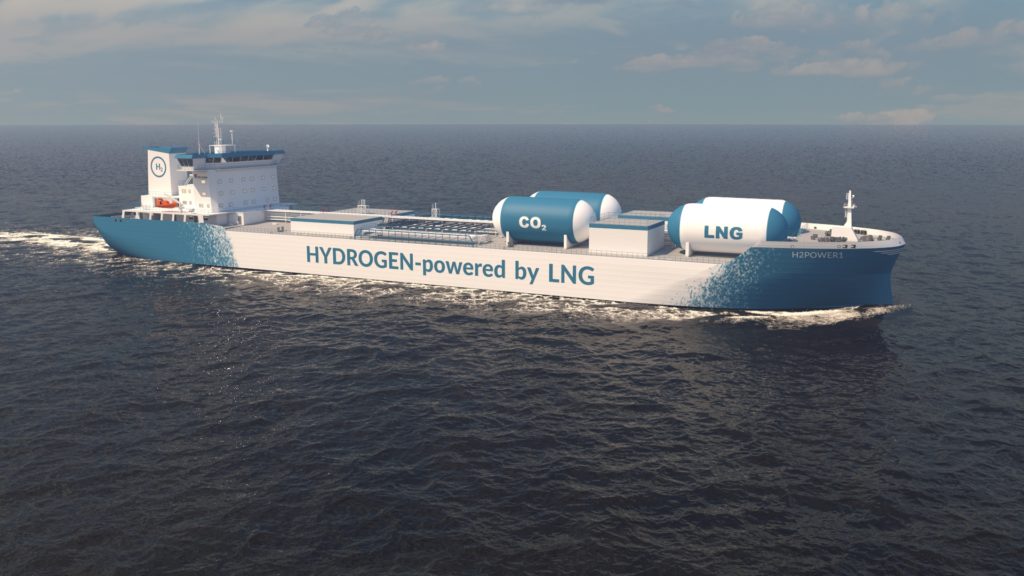 FKAB has been delivering successful ship designs for more than 50 years. This makes us an innovative and reliable partner from the first sketches to the finished production base and delivered ship. Our customers are shipowners, shipyards, authorities and energy suppliers around the world.